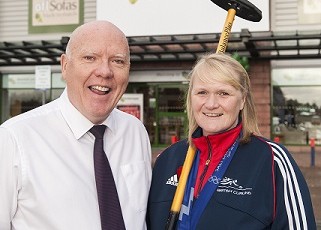 Rhona Martin MBE, Olympic Gold Medal winner and Scotland’s curling champion officially opened Oak Furniture Land’s brand new Glasgow store on Saturday 9th November. Rhona promoted The Royal Caledonian Curling Club’s (RCCC) Try Curling Initiative on the day, which aims to attract new Curlers to the sport and increase public awareness of Curling. The new store has created many new jobs in the city.This was be Rhona’s first public appearance since the announcement that her 2002 Olympic gold medal win has been voted one of the top 10 Team GB Winter Olympic moments of all time. Rhona Martin is the current Team GB ladies Winter Olympic coach and looks after the Olympic hopefuls led by Eve Muirhead. http://www.trycurling.com/

Rhona Martin MBE is an Olympic Gold Medalist former curler from Ayrshire in Scotland now turned BBC broadcaster, she is the current GB and Scottish head curling coach. Rhona famously captained the team at Salt Lake City and threw the ‘stone of destiny’ which decided the gold. Rhona carried the London 2012 Olympic torch, she was a competitive Curler for over 20 years at Scottish and GB level and retired in 2007.

For a long time best known in Scottish curling circles for her uncanny knack of repeatedly failing to win the national championships at the final hurdle, Rhona Martin finally won the right to appear in a major international championship in 1998, where she was skip of the Scotland team that won a silver medal at the European Championships. With some significant changes in personnel, she returned to the championships in Chamonix the following year, where the team was narrowly edged out of the medal placings.

In 2000, Rhona’s quartet finally broke through the psychological barrier of actually winning the Scottish championships, defeating the team led by former Olympic skip Kirsty Hay in the final, and were therefore entitled to represent Scotland at the World Championships, held that year on home soil in Glasgow. They performed well at the worlds, with a particular highlight being the defeat of the Canada side skipped by Kelley Law in the round-robin stage of the competition. However, Law earned her revenge against Scotland in the semi-finals, leading Canada to a 10-6 win, and Rhona Martin and team were particularly disappointed to miss out on a medal of any colour by losing 10-5 to Dordi Nordby’s Norwegian outfit in the subsequent play-off.

The fourth-place finish at the Worlds seemed to leave the team well-placed to secure their place as Great Britain’s representatives at the Salt Lake City Olympics in 2002, selection for which was based on performances in the European and World Championships over the whole four-year Olympic cycle. Crucially, though, changes in the team’s line-up meant that the European silver medal in 1998 was discounted, and this left the door open for the team skipped by former world junior champion Julia Ewart, which represented Scotland at the 2001 World Championships in Lausanne. Rhona had to wait anxiously as Ewart recovered from a slow start to string together an extraordinary sequence of wins, knowing that a gold for Scotland would take Ewart and her teammates to the Olympics, and a silver would result in a special play-off to decide the selection. However, Scotland were derailed in the semi-final by Sweden, allowing Rhona to finally look ahead to her campaign in Salt Lake City.

Illness then came close to scuppering her chances, but she did make the plane journey, and she and her teammates found their Olympic form early, reaching the brink of qualification for the semi-finals by winning five out of their first seven matches. However, they failed to convert a golden opportunity against a USA team that came back to win with a steal at the death. This had a noticeably morale-sapping effect on Rhona Martin, with the team succumbing with surprising ease to Germany in the concluding round-robin match. The team’s chances of progressing were thus taken out of their hands, with a Swiss win over Germany now required to keep them in contention. That duly materialised, but they were still left with the daunting task of winning two successive tie-break matches just to reach the semi-finals. The prospect of a medal, which had days earlier seemed tantalisingly within reach, now looked very distant indeed.

However, Rhona Martin MBE and her team were surprisingly dominant in the first tie-break match against the multiple world championship-winning Sweden rink, and then claimed revenge against Germany to reach the semis. Awaiting them there was Kelley Law’s Canadian rink, who three of the Scottish team had lost to while playing for Scotland at the same stage of the 2000 World Championships. Rhona felt that this experience proved invaluable as they surged to a wholly unexpected win, which guaranteed them a medal. That medal then turned from a likely silver to an actual gold after Rhona successfully judged an incredibly difficult draw with her last stone in the final against Switzerland. The team of Rhona, Debbie Knox, Fiona MacDonald and Janice Rankin thus became Great Britain’s first gold medallists in any sport at the Winter Olympics since Jayne Torvill and Christopher Dean danced to “Bolero” in 1984. Rhona carried the flag for Team GB at the closing ceremony A photograph of Rhona Martin MBE and the victorious team can be found in the National Portrait Gallery collection. Later in 2002 Martin was awarded an MBE for services to curling.

The team lost to Jackie Lockhart’s rink in the three-match final of the Scottish Championships, played within days of their return to Scotland. However, Lockhart subsequently made headlines by winning the world championships for Scotland, and by selecting precisely the same stone used by Rhona to seal victory in the Olympics for her own winning delivery. The ubiquitous rock was dubbed the ‘Stone of Destiny’, and is now housed in a Scottish sports museum.

In 2005, Rhona Martin MBE was back on the world stage, when her all-star team (including Lockhart at the second position) finished 5th at the European Championships.

Martin skipped the British Olympic team to the 2006 Winter Olympics. Despite the team’s best efforts, Rhona’s squad were knocked out of the 2006 Winter Olympics, even after beating the USA 10-4 in just 6 ends. The only thing that would have led them through was if Denmark had beaten Canada in their match, but this was not to be. The Danish team levelled at 8 – 8 but Canada took 1 in the last end, knocking the GB team out and depriving Rhona and her team of the opportunity to defend their Gold medal from 2002.

In 2007 after a 24 year career, Rhona Martin MBE decided to halt playing for the time being and focus on coaching. She then spent 3 years doing the UK Sport Elite Coach Programme whilst delivering the Performance Development Coach role within the national governing body for curling, the Royal Caledonian Curling Club, looking after the National and Regional Academies.

Rhona Martin joined the BBC commentary team for the 2010 Vancouver Winter Olympics, overseeing the curling along with Steve Cram.

In 2010 Rhona Martin was appointed as the new women’s head coach of the British and Scottish curling performance squad and is part of a 5 strong coaching team looking forward to the 2014 Winter Olympics in Sochi, Russia. Rhona is working hard on a daily basis with the athletes and will be responsible for the ladies team in Sochi.

2012 has seen Rhona Martin be part of the London 2012 Olympic torch relay, taking the flame through Glasgow in June to be cheered on by countless Scot’s. She also attended many Olympic’s events in London in her role as a games ambassador.

2013 saw Rhona Martin’s coaching efforts and skills pay off as the ladies team under her daily coaching guidance won gold at the world championships and qualified to represent Team GB at the Winter Olympics in 2014.

Rhona Martin MBE remains a highly respected athlete and coach and is considered amongst an elite group of modern British icon’s of the Winter Olympic games.

1987-2007 – Skip and player for Scotland and Great Britain in many national and international competitions.