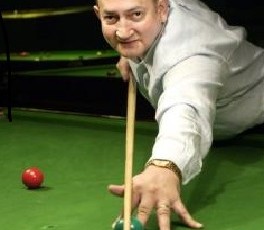 Joe Johnson with three other top players showed off their skills when the Snooker Legends tour pulls into Plymouth Pavilions on May 19th.The cast list features three former world champions and the player credited with being the best player never to have claimed the title.The legends are Steve Davis, Stephen Hendry, Jimmy White and, making his comeback after 10 years out of the sport, Joe Johnson.Comeback kid Johnson, like Davis and Hendry, has won the world crown, while the mercurial White has been in six finals, but to the regret of his many fans, failed to lift the title.The format includds a doubles encounter that will stir memories of the baize boys’ younger days for the watching fans, with Johnson and White taking on Hendry and Davis.Joe Johnson and Jimmy White beat Steve Davies and Stephen Hendry 5-4 overall on the evening which was enjoyed by a packed crowd.

All four have appeared in the city before, but for 60-year-old Johnson it will be an emotional moment.Joe Johnson speaking to The Herald in Plymouth before the event said: “I’ve not played snooker competitively since 2003 when, because of a foot injury that year, I was forced to rest up.“The time just passed by and I decided to retire as I wasn’t able to give the game my full attention due to the injury.“Now I’m chuffed to bits to be included on this tour as it’s with all my old mates and in a city I have fond memories of playing in.”

Joe Johnson added: “I’ve been on the tables non-stop since I heard I’d been added to the tour and I can assure you, when guys like us come up against one another, we want to win.”Johnson, famous for his multi-coloured shoes, won the world title against a whole stack of odds in 1986.The likeable Yorkshireman had qualified for the Crucible event for the first time and was not expected to make much of an impact.Instead, he went on to beat Davis 18-12 in the final and became a household name overnight.And, after seemingly being out of form, he fought his way through to the final the following year where he lost to Davis 18-14.

While none of the legends would claim to be the players they were in their glory days, they all retain the silky skills and amazing concentration levels of old.The master class will, said Joe Johnson, appeal to both the young and up-coming wannabe cuesters, and those who can look back fondly to its golden period.Overseeing the show is host John Virgo and referee Michaela Tabb, assisted by experienced world championship official Jan Verhaas.