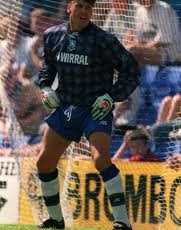 Eric Nixon features as a guest on Sky Sports 2 this evening (15th February 2013) as part of their coverage of Tranmere Rovers Npower league tie against Shrewsbury Town. Eric Nixon played over 300 games in goal for Tranmere Rovers in 2 spells as part of a golden era squad which included many famous cup and league runs, Wembley appearances and many penalty shoot out nail biters. Eric will be on hand to provide his thoughts of the game at half time and is hoping Tranmere can have a good end to a great season and secure promotion. You can catch the game on Sky Sports 2 for details vist www.skysports.com

Eric Nixon is a highly respected former Manchester City, Tranmere Rovers & Stockport County goalkeeper. In a 22 year career, he made over 500 league appearances. He achieved the rare distinction of playing in all 4 divisions of the Football League in a single season. He is a UEFA & FA qualified goalkeeping coach who has completed successful spells with Tranmere Rovers & Fleetwood Town. He is a sports ambassador & football pundit, widely acknowledged as a legend of the modern game. Eric Nixon is the current goalkeeping coach at Macclesfield Town.

Eric Nixon is a regular contributor to the Liverpool Echo & BBC Radio Merseyside. He featured on Sky TV’s Holiday and Cruise Channel in 2012 discussing his career in football.