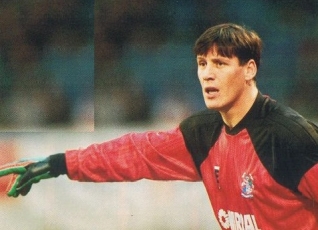 Eric Nixon appears today 12/07/2012 on BBC Radio Merseyside’s Total Football programme at 7pm discussing his career and looking ahead to the new football season.Follow the link to listen again on the BBC iplayer  p00v303z

Eric Nixon is a highly respected former Manchester City, Tranmere Rovers & Stockport County goalkeeper. In a 22 year career, he made over 500 league appearances. He achieved the rare distinction of playing in all 4 divisions of the Football League in a single season. He is a UEFA & FA qualified goalkeeping coach who has completed successful spells with Tranmere Rovers & Fleetwood Town. He is a sports ambassador & football pundit, widely acknowledged as a legend of the modern game. He is the current goalkeeping coach at Macclesfield Town.

Eric Nixon was also a part of the team that won the Leyland DAF Cup in 1989–90, beating Bristol Rovers 2–1 in the final at Wembley. He was part of the Tranmere Rovers golden squad, playing in a time during which the team reached the Coca Cola cup semi-final in 1994 and the play off’s to reach the Premiership for 3 consecutive years.

He has played several times at charity Soccer Six events and at masters football tournaments representing both Manchester City and Tranmere Rovers. In 2012 he released his acclaimed autobiography ‘Big Hands Big Heart’ and completed several booksignings at some of his old clubs and several outlets of Waterstones. In July 2012 Eric Nixon  became the new goalkeeping coach at Macclesfield Town FC.