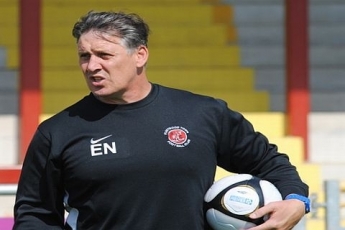 Eric Nixon has today been announced as the new goalkeeping coach at Macclesfield Town FC.
http://www.bbc.co.uk/sport/0/football/18859252

Eric Nixon is a highly respected former Manchester City, Tranmere Rovers & Stockport County goalkeeper. In a 22 year career, he made over 500 league appearances. He achieved the rare distinction of playing in all 4 divisions of the Football League in a single season. He is a UEFA & FA qualified goalkeeping coach who has completed successful spells with Tranmere Rovers & Fleetwood Town. He is a sports ambassador & football pundit, widely acknowledged as a legend of the modern game.

He has played several times at charity Soccer Six events and at masters football tournaments representing both Manchester City and Tranmere Rovers. In 2012 he released his acclaimed autobiography ‘Big Hands Big Heart’ and completed several booksignings at some of his old clubs and several outlets of Waterstones. In July 2012 he  became the new goalkeeping coach at Macclesfield Town FC.