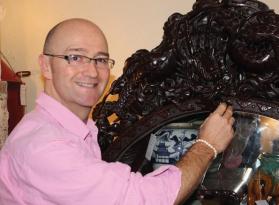 To view David Harper in action you can check out his YouTube channel here; http://www.youtube.com/user/davidharpertalent?feature=watch

A few showreel clips can also be viewed directly at the foot of the page.

BROADCAST AND CORPORATE PRESENTING AND EXPERT CONTRIBUTIONS IN MEDIA, TV AND RADIO.

Having been a professional antiques dealer for many years and prior to this a consultant from the age of 18, with many tv presenting credits to date,  there is no one more passionate, and dedicated to antiques as David Harper. He is a respected antiques expert and tv broadcaster and is available  for broadcast projects requiring an antiques presenter or expert analysis of antiques items and related topics. He is also available interviews and column writing contributions to newspapers and publications. He has also appeared as a guest on many TV and Radio shows in a guest capacity and is happy to be considered for relevant tv programmes.

David Harper is a humble professional with a warm, lively and entertaining speaking ability. At awards, after dinner and motivational events he can inspire audiences of all ages to include the general public, those aspiring to be media and tv professionals and young people. Events like this provide an opportunity to gain an insight into the pride and passion, professionalism and determination involved in being a successful tv presenter and businessman. David’s experiences of working on some of the UK’s leading antiques shows and viewing some amazing items give him a great insight into the weird and wonderful world of antiques and collectibles.

David’s public speaking topics can be tailored to suit public or business audiences in addition to educational audiences and appropriate inspirational talks for young people of all abilities and backgrounds.

Due to his high level of expertise David Harper is available on selected non filming dates booked in advance for antiques and related exhibitions and events.  David Harper at these events is able to provide valuation estimates, motivate & inspire, dwelling on his experiences in antiques and business in a very informal and relaxed manner.

David Harper is available to support corporate and product endorsements or campaigns subject to these not conflicting with any broadcast or other business contractual commitments.

David Harper is keen were he can to support charities and good causes he feels strongly about and is open to receiving charity enquiries to include hosting charity auctions and will support these subject to his diary and other business commitments if he can.

2013 saw him complete filming on several episodes of ‘Bargain Hunt’, ‘Antiques Roadtrip’ and ‘Put Your Money Where Your Mouth Is’ shows which will air throughout 2014 on the BBC.