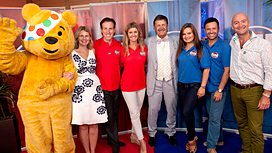 Tim Wonnacott presents a celebrity Children in Need special from Kedleston. Joining Catherine Southon are star Strictly dancers Anton du Beke and Erin Boag, and with David Harper are Lilia Kopylova and Darren Bennett. Not only is there dancing in the aisles at the auction with Tim, but there are also some of the highest ever bids on Bargain Hunt!

2013 saw him complete filming on several episodes of ‘Bargain Hunt’, ‘Antiques Roadtrip’ and ‘Put Your Money Where Your Mouth Is’ shows which will air throughout 2014 on the BBC.