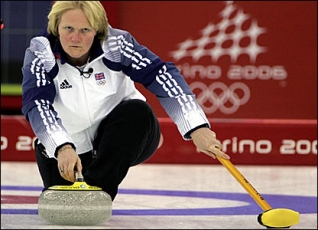 The 2002 Winter Olympics provided Rhona Martin’s most notable sporting achievement, as she skipped the Great Britain women’s curling team to gold – the first for Team GB at the Winter Olympics since Torvill and Dean in 1984. The achievement of the team – which included Debbie Knox, Fiona MacDonald and Janice Rankin – attracted a huge amount of interest and they arrived home to a heroes’ welcome. The stone that clinched the victory, dubbed the stone of destiny, is now housed in the Scottish Sports Hall of Fame exhibition in the National Museum of Scotland. Rhona, from Ayrshire, received an MBE in 2002 in recognition of her services to curling.

After retiring from competition in 2006, Rhona took up coaching and went on to graduate from the UK Sport “Elite Coach” development programme. She is now Head Coach for women’s curling at the sportscotland institute of sport.

Rhona, who is the first curler ever to be inducted into the Hall of Fame, said:

“To be asked to be part of the Scottish Sports Hall of Fame is absolutely amazing and a huge honour.

“I remember being at the launch of the Hall of Fame, just after we won our gold medal in Salt Lake City, and I was in awe at the people who were getting inducted – so now to be part of that is unbelievable.

“To be the first curler in the Hall of Fame is great, and I suppose I’ve now set a trend for the people I coach and given them something else to aim for.”

Congratulating the 2012 inductees, Louise Martin CBE, chair of sportscotland and of the Hall of Fame selection panel, said:

“I am delighted to be welcoming another six sporting legends into the Scottish Sports Hall of Fame today.

“Scottish sport is currently on a massive high after the amazing performances of our athletes at London 2012 and Andy Murray’s first grand slam victory at the US Open, but it is also important to remember the significant contributions made by our past champions.

“Throughout their careers Rhona, Archie, Maggi, Ken, Belle, and Willie have all shown the determination and dedication it takes to succeed in their chosen sports. Each and every inductee is a credit to the country, fully meriting their place in the Scottish Sports Hall of Fame.”

“I am delighted to welcome six prestigious new inductees to the Scottish Sports Hall of Fame. Sport is an important part of Scotland’s culture and through celebrating the achievements of the past we can encourage the sportsmen and women of the future.”

Launched in 2002, the Scottish Sports Hall of Fame has been developed through a unique partnership between sportscotland and National Museums Scotland to recognise and celebrate Scotland’s rich sporting heritage. By providing a public record of Scotland’s greatest sportsmen and women, the Hall aims to inspire younger generations and promote a culture of Scots recognising and celebrating Scottish success across a range of sports.

Hamilton Management are delighted our client Rhona has been honoured fittingly in this way. Rhona is a legend in the spot of curling and her Salt Lake City team will forever hold a place in the nations hearts for their heroics. Many people tend to forget that that was just one tournament and Rhona had an incredibly successful career for many years and todays curling hopes can be inspired by their coach.