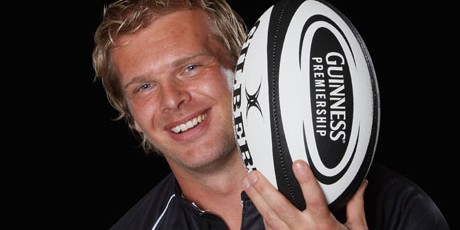 Having played for several clubs throughout his colourful career there is no one more passionate, opinionated and dedicated to rugby as Adam Balding. He remains a respected player at the top of his game and on non-playing days, is available for broadcast match commentary, expert analysis, views ,opinions,interviews and column writing contributions to publications. Adam has recently made contributions to BBC Hereford & Worcestershire and BBC Radio Gloucestershire.

His warm, lively and entertaining after dinner speeches, provide an opportunity to gain an insight into the pride and passion, professionalism and determination involved in being a successful rugby player. Adam’s experiences of more than 200 premiership games, 5 premiership titles, Amlin Challenge Cup winner and Heinekin Cup winner give him a unique perspective into the modern game.  Adam delivers a gripping account of the highs and lows of competitive rugby from his own personal perspective which has seen him be part of winning teams, captain winning teams, have painful injury low’s but work hard and bounce back to premiership high’s and captaincy glory.

Due to his high level of fitness Adam is available in pre-season for rugby workshops in which he can provide team talks, fitness and training tips to help to improve aspiring youngsters skills. whilst motivating & inspiring them to achieve their career  / life goals by dwelling on his own wealth of experiences in professional sport & business.

Adam has often been approached to recommend or endorse rugby & fitness products & is available to support corporate and product endorsements providing these do not clash with any existing club contractual sponsorship commitments.

Adam does lend his support to a number of charities and charitable causes close to his heart wherever possible dependent upon his professional diary and playing commitments. Past charity activity has included supporting the Acorns Hospice and NSPCC.

Adam Balding was born in Coventry in December 1979. He went to Caludon Castle Comprehensive in Coventry gaining 4 A-Levels and 7 GCSE’s before embarking on a degree in Sports Science. But rugby was always a passion for Adam who first came to the notice of Leicester Tigers academy scouts whilst playing in his local club Broadstreet RFC. Putting his degree course on hold he entered the academy, he made his full professional debut in the first XV for Leicester aged just 18.

Adam learnt his trade through playing in his early Leicester career with some of the greatest players the game has ever produced including Martin Corry, Austin Healy, Lewis Moody and Martin Johnson. The Leicester squad was truly blessed during this period with a wealth of young and old talent. He went on to win 4 consecutive Premiership titles with the Leicester Tigers between 1999 and 2002. In addition he won 2 consecutive Heineken Cup’s in 2001 and 2002, being part of the only side to date who have managed to win the competition in consecutive seasons.

Adam has had the honour to represent England at all age groups, including England 7′s in Chile & Argentina. He have also played several times for England Saxons against the likes of Ireland, Wales & Argentina to name but a few as part of the England ‘A’ Team xv.  Adam was an England tourist for the full summer tour to Argentina in 2003 where he played in the mid week team and then sat on the bench for the full England 1st xv. After this he was then included in the Six Nations training squad in the 2004/2005 season. He continues to be available for England selection and hopes one day to finally represent England in the first XV.

Adam joined Gloucester Rugby at the start of the 2004/05 season, he quickly established himself and by the end of his first season he had been appointed captain and had won the club’s player of the season award.

An injury kept him out of much of the start of the 2005/06 season though he returned in November and bounced back to help Gloucester, he was a part of the squad to gain the Amlin Challenge Cup, also referred to in the rugby world as the European Challenge Cup.

In 2006/07 although Gloucester finished that year’s Premiership season in first place they ended up Runner Up losing out to Adam’s old club Leicester in the final at Twickenham. 2008 saw Adam leave the Cherry and Whites following 4 successful seasons, 2 of them as captain and having completed 2 successful loan spells with first division teams Moseley and Leeds Carnegie.

Adam signed for Newcastle Falcons in 2008 and spent 2 happy years with them until 2010. During this time he reached 2 further European Challenge Cup quarter finals at the club and captained the Falcons on 7 occasions delivering with several solid performances.

2010 saw him move to Worcester Warriors on loan where he played a major role in his first season helping them regain premiership status. Having captained the club 5 times, his second loan season at Worcester saw him pick up an injury which sadly kept him out of much of the season’s action. However wanting to keep himself involved in the game whilst on the road to recovery, he gained worked for BBC Hereford and Worcester with match day commentaries.

BACK TO NEWCASTLE FALCONS, FITTER THAN EVER, JOINS LONDON WELSH IN NOVEMBER 2012…

Adam re-joined the Newcastle Falcons in February 2012 until the end of the season for his second spell at Tyneside. However after a hard fought season Newcastle’s fight to stay in the Premiership was unsuccessful and they were relegated. Although an offer was made to retain Adam he felt he needed a new club challenge and with this in mind has trained harder than ever in the build-up to the 2012/13 season and in November 2012 signed for premiership newcomers London Welsh. The story continues…

2005 – Gloucester Player of the Premiership Season